The International Spaceflight Museum (ISM) is a museum about space and spaceflight, built in the virtual world Second Life (SL). It’s run by the Spaceflight Museum Planning Group, a group of enthusiasts and volunteers from around the world. I helped with the ISM starting in October of 2005, by making exhibits, building infrastructure, organizing events, writing documentation, giving tours and being a point of contact. 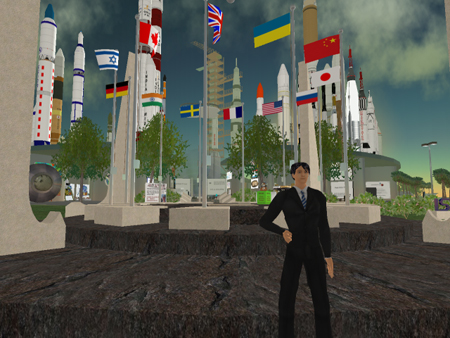 This is a picture taken near the landing point where people first arrive at the ISM. I built it based loosely on the fountain at the Purdue University Engineering Mall. 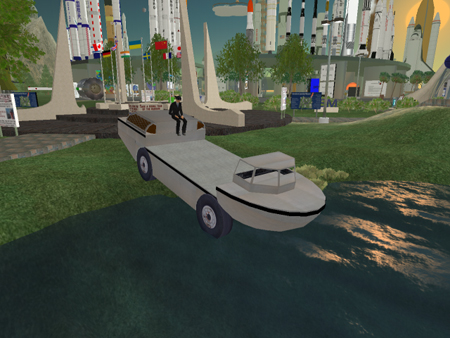 Near the landing point, you can click a sign and a “LARC” will appear. It’s an amphibious vehicle.  You can sit on it and let it take you for a tour of the ground level at the ISM. I wrote the script that powers the automated tour and Chris Reitveld made the vehicle model. 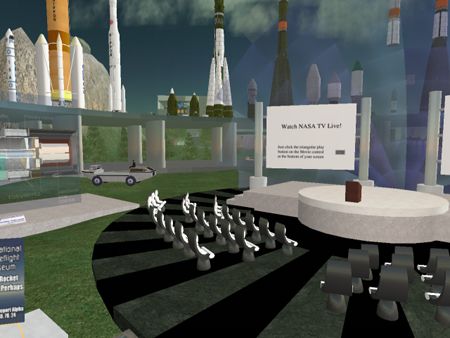 Near the end of the tour, you’ll pass by the central stage which shows NASA TV on the big screens. I built the stage and screens, Hiro Pendragon made the bandshell, and DaVinci Doctorow made the chairs. Presentations and other events happened there. There’s a list of the early ISM events on the Science Center group’s website. The presentations included slides, 3D models, video clips, and lively discussion.

I also made the giant “rocket ring” where most of the rockets sit at the ISM. 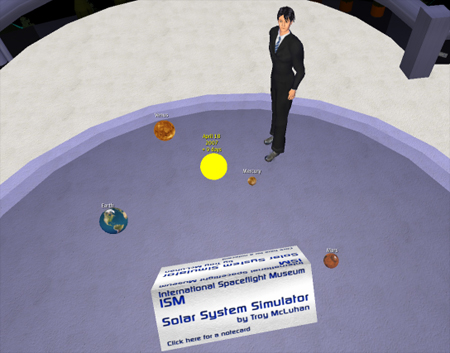 Sixty meters above the central stage, you’ll find the first science exhibit I made in SL: the Solar System Simulator. If you say a date like “April 18, 2007”, the planets will all move to the positions they had on that date. If you say “unpause”, the date will start to advance in one-day increments and you’ll see the planets moving in their orbits. 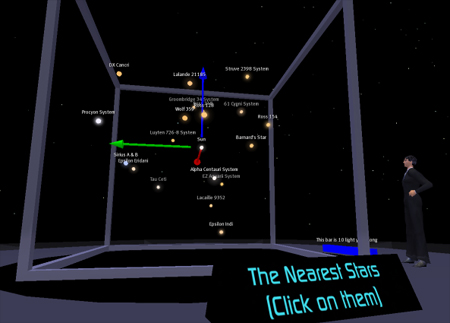 If you fly far up in the sky on Spaceport Alpha, you’ll pass the International Space Station and models of the planets. The last stop is an exhibit called The Nearest Stars, showing the three-dimensional arrangement of the 20 stars and star systems nearest the Earth. The whole display rotates to help you get a better feel for the 3D arrangement. If you can’t read the text in these photos, then I guess you’ll just have to visit the exhibit in Second Life. 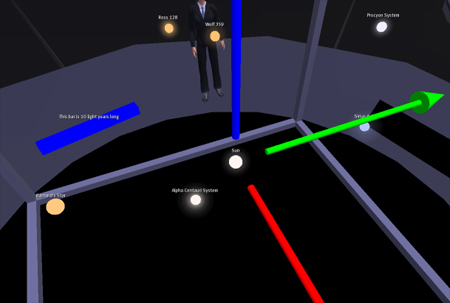 I also wrote a lot of the notecards associated with the various ISM exhibits.

I haven’t been actively working with the ISM since around September 2007.

You can visit the ISM by going to the landing point in Spaceport Alpha. There is an audio-narrated flying carpet tour of the museum which visits many key exhibits and gives an overview of the early history of the museum. Here is a video of that tour: