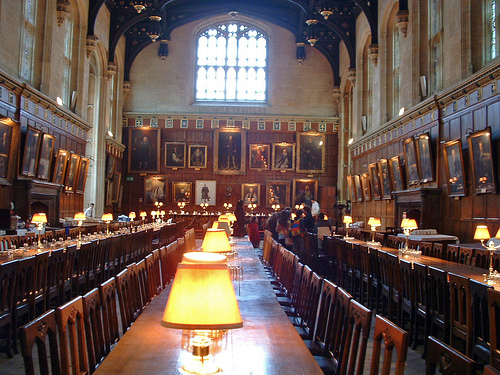 The Great Hall at Christ Church provided the model for Hogwarts Dining Hall in the Harry Potter movies. Christ Church is one of the largest colleges in the University of Oxford. J.R.R. Tolkien lived nearby.

The One Ring corresponds to the Elder Wand (both being the most powerful that ever existed, both of which were destroyed by the protaganist at the end, although Frodo had help from Gollum.)

Gollum corresponds to whom? I’m thinking Draco Malfoy, because like Smeagol, he started out innocent enough, but then became nasty and evil (but with redeeming qualities). Also, Smeagol wore the One Ring for a while, and the Elder Wand bore alleigance to Draco for a while (although maybe he didn’t know it).

Gandalf corresponds to Albus Dumbledore, the old wizard who guided the master plan, got killed, but still helped out after that.

The Dark Lord Sauron corresponds to Lord Voldemort. Of course, we never see Sauron (except for his eye) and we see far too much of Voldemort.

Both Frodo and Harry had friends who helped them, but I’m having difficulties finding any good correspondences between any of the specific friends (besides Gandalf / Dumbledore).

Those are the most obvious correspondences, and they’re not perfect. Can you think of more?

Photo credits: The great hall by katclay on Flickr is licensed under a Creative Commons Attribution 2.0 license.

Note: Alice’s Adventures in Wonderland were inspired and written at Christ Church by Lewis Carroll.

One thought on “A Fun Little Game”