This is the second post in my series about SciBarCamp on March 14–16, 2008 in Toronto. Note that I’m writing about my experience; there were many concurrent sessions so others had a different experience.

At 11am, Andrew Hessel and Jim Thomas gave a brief introduction to synthetic biology, which is “the latest flavour of genetic engineering.” Andrew outlined the opportunities and Jim outlined the challenges. For example, the now-low cost of doing synthetic biology means that it can be used to find solutions to problems that wouldn’t have been tackled that way before (because expected revenues used to be far less than the development costs). One challenge is safety; how do you make sure that someone doesn’t create a new supervirus (either on purpose or by mistake)? There’s also a lot of potential for economic disruption. What happens when someone engineers a biosystem that turns cellulose into gasoline? Further reading here and here. 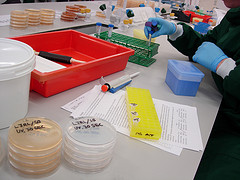 At 11:35, Yutaka Shikano from Tokyo gave a talk about some new software called MIMA Search which can read a set of documents like MIT’s OpenCourseware, apply natural-language processing, and produce a network (picture) showing relationships between concepts. I think the idea is to uncover new relationships. Or at least I think that’s what it was about. I found the presentation hard to follow.

At 12:00, Eva Amsen gave a short talk encouraging everyone to write down ideas on a flip chart labeled “Ten Things Everyone Should Know about Science.” Then it was time for lunch (sponsored by Microsoft). I wrote the following on the flipchart: “You can’t escape gravity.” It’s a common misunderstanding that you can escape gravity, for example, if you just go high enough off the ground. Robin Blume-Kohout (a physicist from the Perimeter Institute) suggested that you could just go to a region of flat spacetime. Then someone else suggested maybe going to a place with no gravitons (the particles that give rise to gravity). Robin pointed out that the spacetime meaning of “escape gravity” comes from General Relativity, whereas the graviton meaning comes from the Standard Model, and if we could just agree on one all-encompassing meaning it would imply that we have a Grand Unified Theory of Physics! (We don’t.)

Also during lunch, some folks from UTIAS had some Mars rover robots driving around so we got to see those. I also played with a keyboard that Rick Sacks had set up to play things like “E”, “equals”, “m”, “c” and “squared” —- a different word for each key on the keyboard.

Around 2:00, Rick Sacks gave a musical / percusison/ foley art / performance. It was very entertaining. Someone made a video.

Then Lee Smolin and Diane Nalini de Kerckhove led a discussion asking “Can Technology Make Us Happy?” but it ranged much farther than that and is hard to summarize. Sorry! I guess you just had to be there…

At 3:30, Paul Bloore, the CTO of Idée Inc., gave a demo of their software. You can give it an image and it will find all similar images in a database of images (e.g. on Flickr or someday the Web). It’s really neat, and cool that it’s from Canada (Toronto)! One application is to find anyone using your image out there on the web (without your permission), to help enforce trademarks and copyrights. Another application would be to put it on your iPhone so that when you take a picture of a book in a store, it finds where you can get it cheapest online. Or you could take a picture of a soup can in the grocery store and find out if it meets your dietary requirements (or your organic standards, or your labour-rights standards, or whatever floats your boat) – making the whole product-labeling debate seem rather silly. 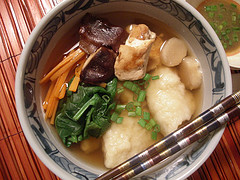 Photo Credits: Biology 253 Lab by By lofaesofa on Flickr, Spacetime curvature model by Johnstone on Wikipedia, Suiton! (dumpling soup) :))) by Rubyran on Flickr. All are licensed under a Creative Commons Attribution 2.0 License.

One thought on “SciBarCamp – Part 2”